World of Enea: Locations and Cultures 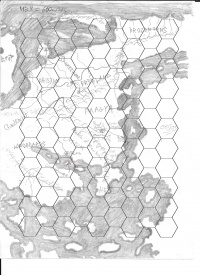 Enea is properly the name of a continent, similar in climate and culture to early medieval Europe.

Most of the action right now will take place in the northwest of that continent, an area inhabited by a group of humans collectively called the Spearfolk. They got that name because, when they came, they came with spears.

Over a thousand years ago, the Spearfolk left their ancestral home on the Scathe Isle, north of Enea, and invaded the mainland, murdering and pillaging as they went, and pushing the original inhabitants south and east, over the forbidding Grinzbjergir, a treacherous mountain range running West to East that forms a natural barrier between what are now Spearfolk lands and the rest of the continent.

Since then, the Spearfolk settled in different areas and have developed different cultures and languages, but they still preserve a common history and their speech is mutually intelligible.

The Northwest, from the Grenzbergen to the sea, is Frisjen (FRIZ-yin). The people who live there are called the Frisch, which means "peaceful" in their language. They are the least warlike and most commerce-minded of all Spearfolk, as they have access to the sea and thus to the safest and most efficient trading routes of the time.

Frisjen is part of the burgeoning Holy Freefolk Empire, so they have no Cyning ("king"). Rather, they have a Curfirst, a regent who holds power in the name of the Kaesar ("emperor"). The current Curfirst is the descendant of the previous line of Frisjen kings.

Under the Curfirst are several regional warrior-nobles, called Thanes, who are responsible for all military protection in their region, and who are charged with raising and maintaining an army for the disposal of the Kaesar.

Most players in my setting begin play in or near the town of Marcktdam, which is in the easternmost region of Frisjen, called Weserhelm. Marcktdam itself is kind of a phalanx jutting into the territory of their neighbours, the Seaxes or "Shortswords". Marcktdam has only about 1,000 inhabitants, but it feels bigger and more important, because it is the last "civilized" town until you reach Freeland, and because it is on an important east-west river, the Nackarbrunn, and an important east-west road, making it an important trading stop. In fact, it is an essential stop for goods going to and from the rest of the Freefolk Empire.

Marcktdam is relatively "safe" and unmagical, and there is no standing militia or armed town guard. But just east of the town is a dangerous marshland and beyond that a dark forest, both of which people tend to avoid.

The Shortswords are nowhere near as peaceful, nor as unified as their Frisch neighbours. They are still a land of competing tribes, each led by a Cyning or king. Their lands have been claimed as part of the Freefolk Empire, but they are resisting violently, and much of the military might of the Freefolk is tied up in subduing the Shortswords. Their name comes from the often ceremonial shortsword they all wear. Even children of a certain age (about 12) are carry one, male or female. And though noncombatants's shortswords have dulled edges, you should still assume all Shortsword people are proficient with the weapon.

Beneath the Cynings would be the Jarlingas, warrior-nobles who administrate and protect smaller parcels of land in the name of their cyning. However, most of these have gone into exile in the north, where they are rumoured to be raising an army to retake their lands. Many of the cynings have been killed, taken as hostages to Freeland, or in a minority of cases, accepted Freefolk rule and the Freefolk religion, and so been allowed to retain their title and privileges.

The Freefolk themselves originally inhabited the Southeast of the Spearfolk territory, at the foot of the Grenzbergen. There is a narrow pass through the mountains in the south of their lands. 400 years ago the mighty Latian (LAY-shun) Empire sought to conquer the Spearfolk, knowing they were disorganized, tribal, and prone to fighting amongst themselves. They marched through the pass, intending to defeat each tribe, one by one. But instead the tribes who lived near the pass formed an alliance and defeated the Latians, who never again ventured into Spearfolk Territory. Their empire fell not long after. The Alliance called themselves the Freefolk because they were uniting and fighting for "freedom from Latian rule".

Ironically, 400 years later, they are the imperialistic aggressors. They also introduced monotheism into Spearfolk society. They worship one god, whose name is taboo, and all other deities are considered demons and devils. They call their god "God", "the Lord", or, to avoid confusion with human lords, "the Morninglord" (which suggests this deity was originally a god of light). The Freefolk insist everyone in their empire abandons belief in the Old Gods and worships the Morninglord.

On the North Coast of Enea, a peninsula juts into the cold Isensee. This peninsula is called The Narrow, and it is the home of the southernmost of the Norguman or "North People", the most violent of the Spearfolk. The Norguman of the Narrow are called the Speardenes. "Dene" means "valley", so they are "The People of the Valley of the Spears". Rather than attacking them, the Freefolk Empire is attempting to treat with them. Therefore they have sent missionaries instead of warriors to convert them to the Morninglord. Many Speardenes have "converted", though in fact they have just added the Morninglord to their existing pantheon, rather than abandoning their original gods.

The other Norguman live on the Scathe Isle. On the western side live the fierce Fjordingar, the fiercest and most ruthless of all Spearfolk. When they come, they come to kill and to take, and the only thing that keeps the mainland safe from them is that they are too disorganized to present a unified threat. Their name comes from the fact that their territories are riddled with fjords. They are expert sailors and navigators, as well as warriors, and they have no fear of death.

On the eastern side of the Island dwell the Youngblades, named after their leader, Aerk the Young, who is Cyning of many tribes, but is barely 20. Unlike the Fjordingar, the Youngblades are unified under one banner, and Aerk has designs for his own empire. No one on the Scathe Isle worships the Morninglord, and no missionaries have ever dared go there.

Finally, there are the Fenrunners, who live in the Frozen Fens in the extreme Northeast. This area is so icy and inhospitable that no humans other than the hardy Fenrunners can survive their. The harshness of their environment has left the Fenrunners little room for culture or civilization, so they are the most barbaric of all Spearfolk, and in fact all other Spearfolk have disowned them and refuse to recognize a kinship (though their language remains mutually intelligible). A range of steep, snow-topped mountains running north-south separates the Frozen Fens from the rest of the Spearfolk, so there isn't much communication between them.